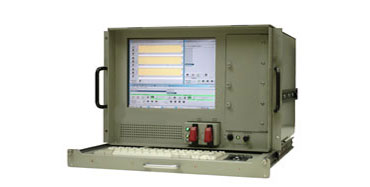 The Peripheral Replacement System emulates existing Navy peripheral equipment that is difficult and expensive to maintain. It combines the advantages of modern off-the-shelf technology with a robust mechanical design that allows it to meet the environmental specifications required for naval shipboard applications. The emulator is configured and operated via an intuitive GUI designed to minimize training time. Networking, remote control and greatly increased storage capacity are just some of the additional benefits provided by the use of the emulator. When connecting with legacy computing equipment, it is designed to behave such that no program changes are required. All connector types in MIL-STD-1397C are supported and non-standard connectors can be specified as desired due to the incorporation of configurable connector plates. Porting over existing media can be accomplished using a conversion utility which is included with the emulator, thereby eliminating dependence upon obsolete and unsupportable media.

The emulator replaces a myriad of different peripherals with up to eight different or identical peripherals being emulated concurrently. In many cases, the emulator can replace legacy devices for no more than the cost of the original equipment annual maintenance. These saving multiply depending upon how many devices the emulator is configured to replace.

Disk packs and Removable Interchangeable Media Modules (RIMMs) are mapped to local or networked disk drives. Multiple packs or RIMMs can be stored on a single disk and are easily mounted. An option exists to run at full speed or to emulate the original speed of the equipment.

Tape transports are replaced by mapping local or networked drives to magnetic tape unit numbers. All tape commands are supported such as read, write, rewind, write tape mark, space file, etc. The number of tapes that can be stored is limited only by available disk space. An option exists to run at full speed or to emulate the original speed of the equipment.

Keyboard and display text may concurrently be printed and recorded to text files making cut/paste operations possible. Operator keystrokes can be stored in macro files and replayed, saving time and eliminating errors for complex or repetitive command sequences.

Printed text is displayed in a window and can be routed to a physical printer or text file as required. Modern networked and USB based printers are supported.

Gigabit Ethernet connectivity is included allowing the emulator to communicate with servers, other emulators, or SANs. Remote control over the network is supported making it possible to centralize control.

The emulator can be configured with multiple mass storage devices. Mass storage options include hard drives, solid state drives and CD/DVD/Blu-Ray drives. In the rugged variant, a special compartment exists for mounting drives that are not qualified for shock or vibration, ensuring they are mechanic. An option exists to run at full speed or to emulate the original speed of the equipment.

The emulator can be adapted for devices not listed. Please contact sales to discuss your application.

65 to 75 lbs., depending on configuration

This feature-rich module reads IRIG-B and GPS time signals along with IEEE packets with remarkable...

IXI’s Universal Tap Box is the effortless way to make connections to parallel NTDS interfaces. I...