The Bridge System connects legacy NTDS equipment via Ethernet. It minimizes the length of NTDS cable runs between computers, displays, mass storage devices, sensors or weapon systems while extending their communication range far beyond MIL-STD-1397C maximum distances. The Bridge makes the hardware and protocol conversions that allow the legacy equipment to communicate over existing NTDS channels without modification to either end and without awareness that the Bridge is in-between. Moving the long haul communications to a network architecture makes it easier to implement redundant paths through the network fabric, greatly improving the survivability of the interface. With the Bridge System it’s now possible for NTDS devices to connect virtually anywhere within the reach of a network connection. Cable bulk and weight are also greatly reduced.

The Bridge System consists of two servers, one connected to the legacy NTDS device at each end of the interface. The servers connect together over a dedicated or shared Ethernet network. In operation, the servers convert the specific NTDS channel protocol into Ethernet packets that are transmitted and converted back to NTDS at the distant end. The server is typically mounted near the legacy equipment to make the NTDS cable run as short as possible.

Each server runs a firmware protocol module that communicates with the legacy device on its end. The included generic protocol module can be used on most NTDS channels without modification. For channels with special requirements, protocol modules can be customized and uploaded permanently into the server’s non-volatile flash memory. At power up, the server initiates the protocol program with no user intervention providing automatic, transparent “passthrough” operation of the legacy channel.

The Bridge System is designed with dual Ethernet ports to significantly increase reliability. When configured to operate with both Ethernet ports, if one interface goes down, operation continues without interruption on the surviving path.

The Bridge System can be implemented using various hardware versions. All versions are functionally compatible and can be different at each end of the legacy interface:

Parallel Types A, B, C or H
Serial Types D or E

This feature-rich module reads IRIG-B and GPS time signals along with IEEE packets with remarkable... 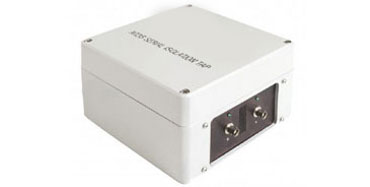